The lack of public sector investment in agriculture in terms of roads, water infrastructure, storage and processing facilities contributes to food insecurity and is a hurdle to (even desirable) private sector investment, according to participants at the Committee on World Food Security (CFS) hosted Regional Consultation Meeting for Africa held on the 28th to 29th November 2013 in Johannesburg, South Africa. The two-day meeting, which brought together African and Africa-based stakeholders such as research institutions, government, international NGOs, producers’ organisations, smallholder farmers and investors, focused facilitating engagement from stakeholders on the Zero Draft of the CFS’s principles for responsible agricultural investments (rai) in the context of food security and nutrition. 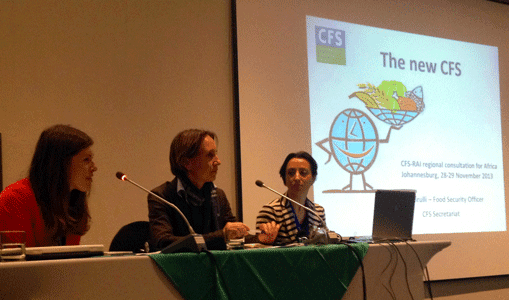 The CFS was established in 1974 by the United Nations to review and guide policies concerning world food security. During 2012 it concluded a Global Strategic Framework on Food Security and Nutrition and a set of Voluntary Guidelines on Responsible Tenure of Land, Fisheries and Forests in the Context of National Food Security. However, implementation of these is in the early stages. Meanwhile, the New Partnership for Africa’s Development (NEPAD) has supported the implementation of the Comprehensive African Agricultural Development Programme (CAADP), a framework by African states.

According to Martin Bwalya of NEPAD, it is essential to identify how to use public sector investments to leverage private sector investments, and to clarify how states can support domestic investors (especially farmers themselves) to position themselves favourably in relation to foreign investors. ‘What is standing in between people and extreme poverty is what people are doing with their land – implication: you cannot take it away’, he said.

Mamadou Cissokho, a farmer representative from Senegal, reprimanded the public representatives for presenting a framework that failed to address the constraints faced by African farmers:

‘In West Africa, small farmers’ fruits and vegetables are rotting – they have no incentives to get these to market. There is no value chain. The small farmer has no ability to establish industries. The fruit are rotting and there is no private investor that is interested in this area…they want 30,000 and 50,000 hectares of land – and then when they get this land, they are not investing. Governments create nice conditions like they don’t have to pay taxes, unlike our own citizens. In West Africa, we are not transforming our products, they are always sold in raw form. We produce cocoa, it is exported and then is imported back as chocolate. Farmers cannot set up the industries to transform our raw materials. Now foreign investors want to compete with us, the small farmers, on our own land. We want to understand why don’t they invest in transformation in the value chain.’

The prevailing view was that private sector investment was necessary but it needed to be better directed and regulated so that it also benefits the host country’s job creation, food security and agricultural sector. Some argued that African farmers need to set up farmers’ associations to ensure that they exert influence on governments and external investors. 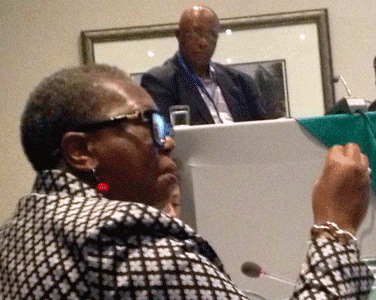 ‘That’s the way to create synergies between small and large farmers – you need a critical mass for producers to get up the value chain, and need to be more organized to get that’, said Honourable Muba of Zimbabwe, permanent representative to the FAO. As she noted:

Important questions were raised about the responsibilities of stakeholders relative to food security, in particular the role of governments and private investors was interrogated. The voluntary nature of the CFS-rai principles was also raised as a challenge. The weak institutional and regulatory environment in some regional countries was viewed by some participants as requiring obligatory rather than voluntary guidelines. The tricky part here is that only countries have legislative authority to make binding laws (or even sign up to and ratify treaties). This means it is crucial to create country level buy-in and ensure that the CFS-rai principles are dovetailed with existing relevant regional agricultural frameworks (such as the LPI’s) that have country level buy-in to assist create traction for them. However, there would still need to be lobbying for aspects of the principles to reflect in national land and agricultural legislation that relates to food security.

In summary, Chiara Cirulli, Food Security Officer at the CFS Secretariat, presented key messages from the participants including the following points: